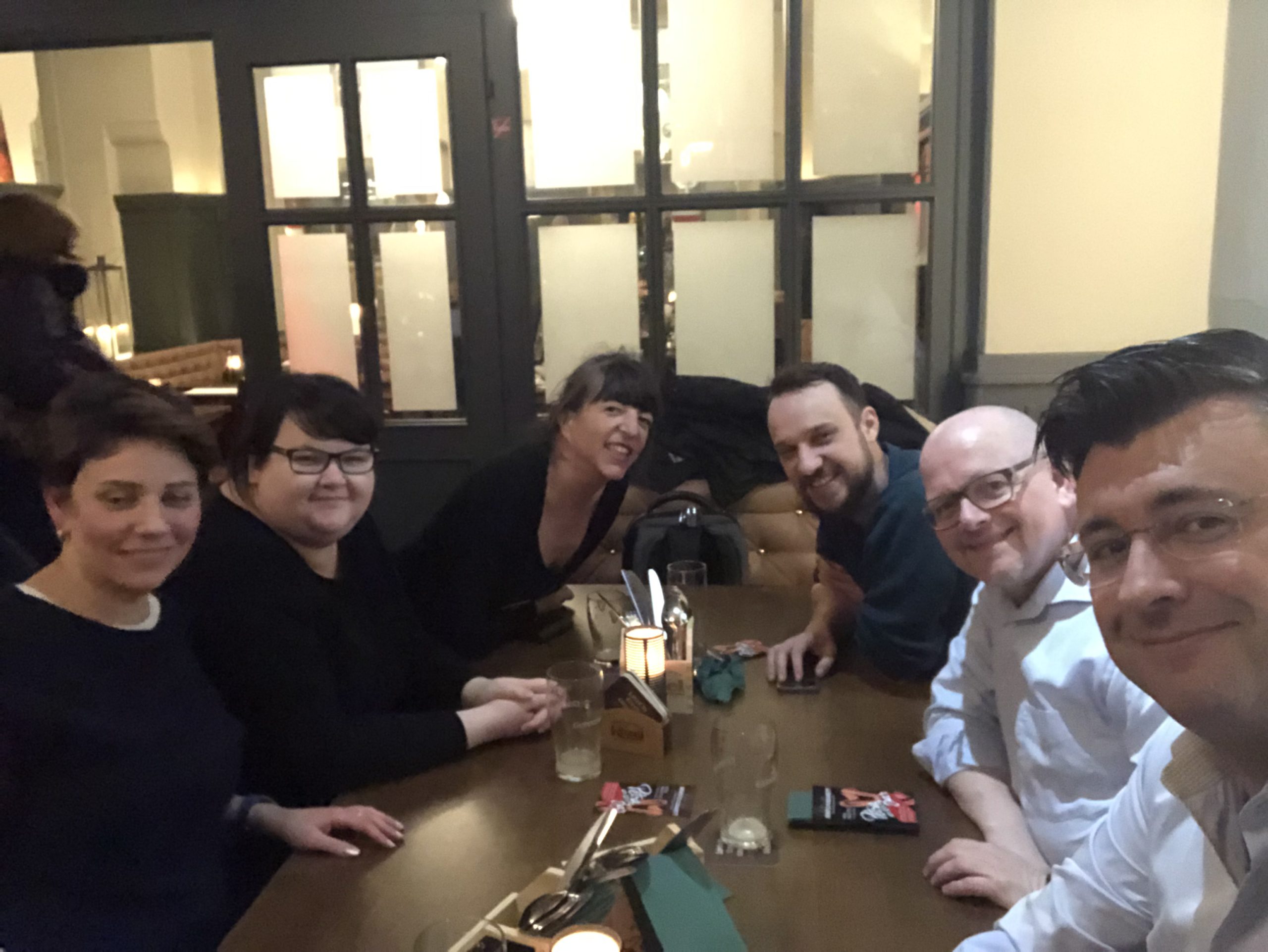 ALUMnites happen worldwide and usually it is the first Thursday of the month. So on Feb 6th it was time to meet again. Several times we explored different options and tried to find a new local pub for our gatherings, since the Hofbräu zum Rathaus (some of you may remember) closed in late 2018. Well, we found something new at the same address – The Long Hall Pub & Kitchen. Now it looks like an Irish pub (no wonder, since it is run by the ex-manager of the legendary Charlie P´s) and has a very nice selection of beers and food. We gathered there, had great time together and very interesting discussions over a pint (or more). We will be definitely coming back! 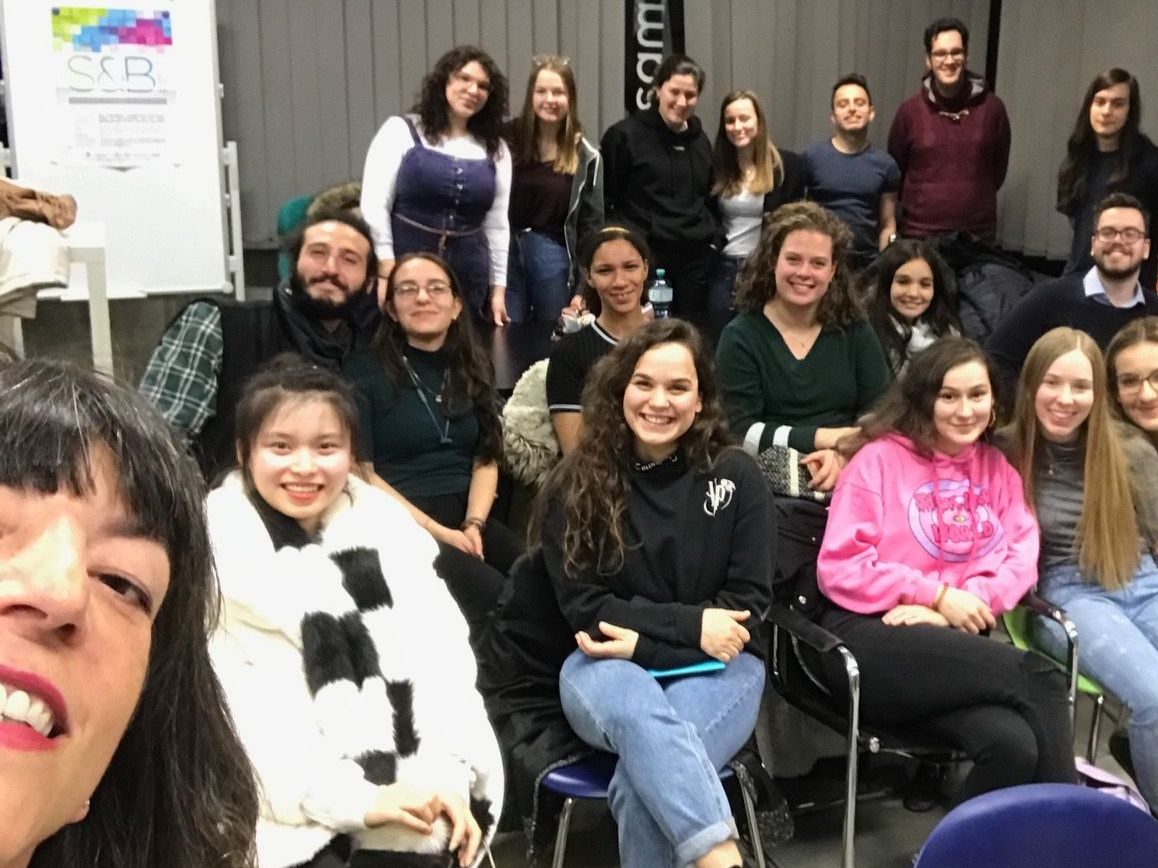 It was an emotional “checking out 19/20” LCM for all LCs in Vienna (WU, UV, TU) on Jan 22nd, 2020. After the exercise “Reflexion space” everybody listened to a heart-breaking final speech of the past LCPs. See “checking out 19/20” picture with Konstantina Borozntiouchina (UV) Gunther Winkler (WU) and Chris Jezierski (TU).

Petra Salmutter represented the AIESEC Alumni Austria team and showed the bridge between AIESEC Alumni and student AIESEC. During that kick-off of our planned LCM Austrian “Roadshow” she presented the activities of AAA and invited the student AIESECers to join Alumni events like ALUMnites and to remain informed via our newsletter or Facebook posts. It was a great option to start our roadshow with super motivated AIESECers! Thank you for inviting AAA! 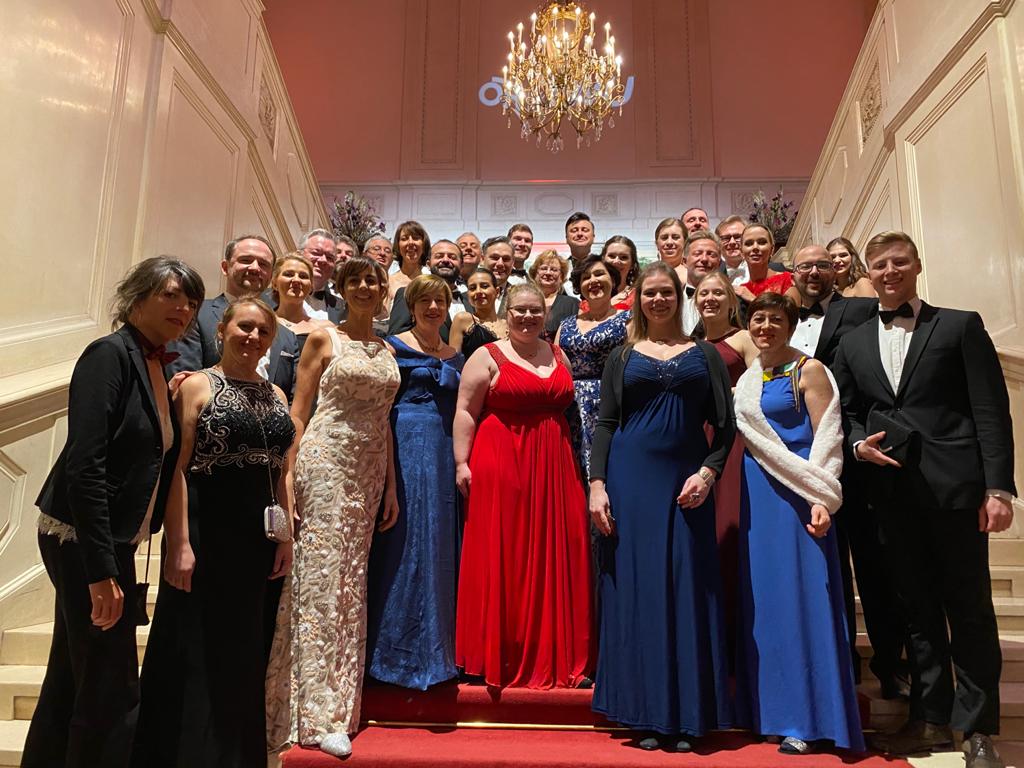 It was an absolutely fabulous weekend with our international friends from the 10th of January to the 12th. We also had many social programs organized to spend additional time together, while showcasing Vienna’s best spots. We had delegates from different countries like Germany, Italy, Greece, Russia, Slovakia, Austria, Bulgaria etc. In total, we were almost 50 excited participants enjoying a great weekend together in Vienna.

The Presidential election took almost the whole Friday, but it was very well organized on the top floor of the Erste Campus. Besides many Young AIESECers, seven Alumni were present at the elections. The battle between the candidates was powerful and it was hard to make a decision for who to vote. In the end, the new MCP in Austria is Mariana Barragan from Columbia.
After the elections, we met our international guests together with other Alumni for dinner in the famous restaurant Lugeck Figlmüller, where we enjoyed traditional Austrian food. Some of us joined the after-election party in The Lizard, a local Pub. Some even closed the 1st evening in Manolos, a Latin Dance Bar.

Our second day started with a dance course, so we could properly prepare for the Ball. We were 21 people who participated in the dance class. There we learned the basic steps for the traditional Waltz and how to dance the Quadrille, which is a massive group dance that starts after midnight at the Ball. The time spent at the course was filled with fun and smiles while enjoying the incredible classical music. We spent our lunchtime in the restaurant Griechenbeisl, which is Vienna’s oldest inn with traditional Viennese cuisine. We had the great chance to stay in the famous Mark Twain room, where they had framed autographs of world-famous people like Mozart, Mark Twain, Beethoven, Waldmüller, Schwind, and many more on the walls.

The sightseeing tour was organized by Petra with the support of Andie. As Peter Mandl joined the tour, he shared spontaneously his knowhow about the history of specific spots in the 1st district since the Medieval time. One of the sights was Ruprechtskirche, the oldest church in Vienna.

At 8 pm we had our meeting point at the entrance stairs in the Vienna Hofburg, where we took our group picture at the WU Ball 2020. So many beautiful people met there before the grand opening of the glittering ball night. We had tables in the glamorous Zeremoniensaal with live dance and party music of groups like PLAYGROUP and CAPONE.

One of the highlights was the Quadrille in the Festsaal after midnight and a 2nd time after 2 am. It was hilarious to follow the instructions for the group dance, which we practiced during our dance class in the morning. It even had great similarities to a rollcall. In between, we could dance on the many modern or classical dance floors and enjoy some drinks. The Ball officially ended with the Last Waltz at 5 am.

For brunch time we met in Landtmann, Vienna’s most sophisticated coffee house located by the Ringstraße. More than 20 AIESEC Alumni enjoyed our last hours together.

We would be happy to welcome you at the next WU Ball, which will happen in January 2021. Until then – see you at one of our next events and conferences! 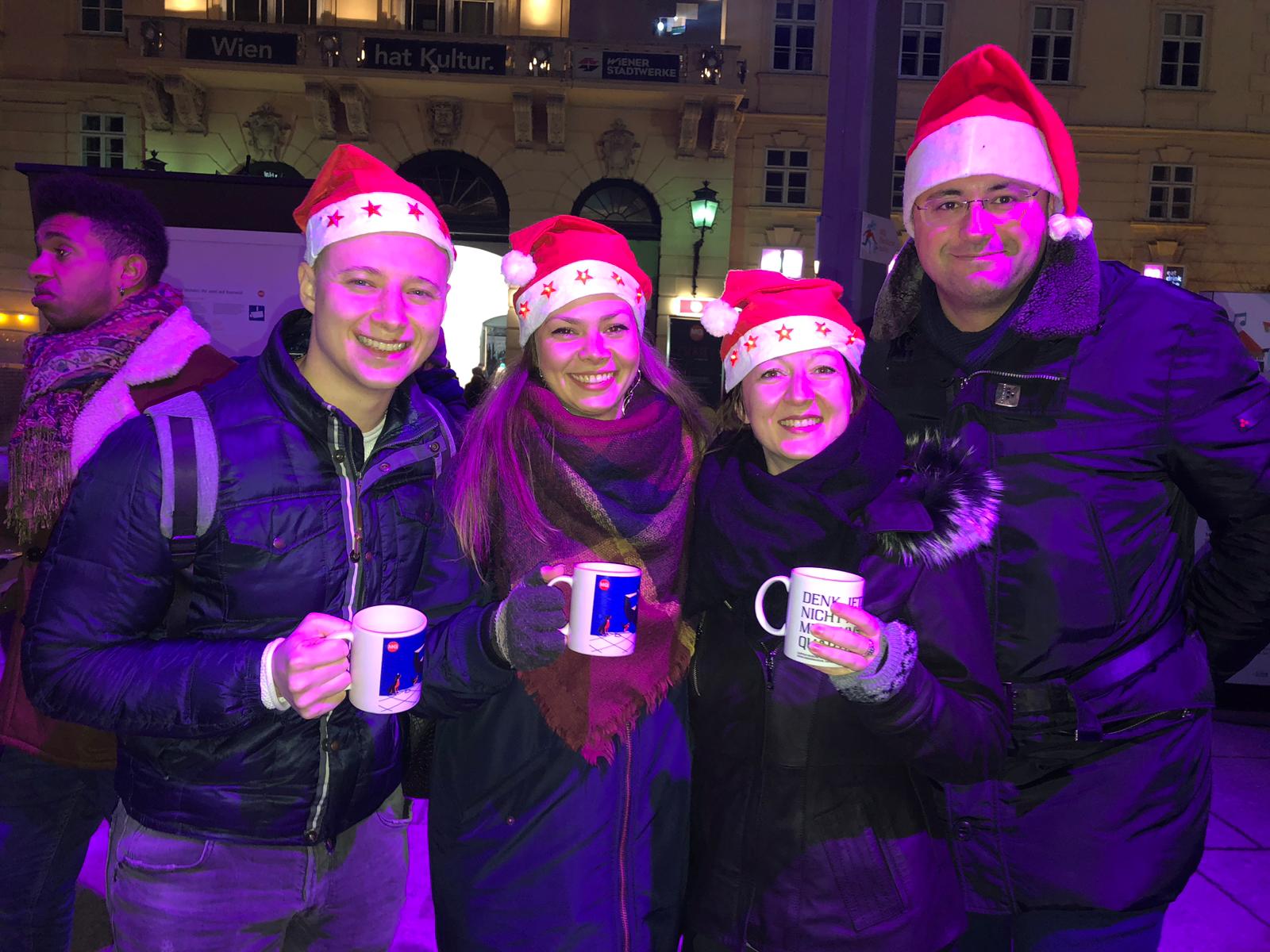 One more year goes to an end, we hope it has been a great one for you! It’s been a pleasure for us to spend time making AAA a pleasant place for older and younger generations to meet, exchange experiences, ideas and nice moments! We’ll be back in January to continue our mission, we can’t wait to see you at our next events and in the meantime, we’d like to wish you a Merry Christmas and Happy Holidays! 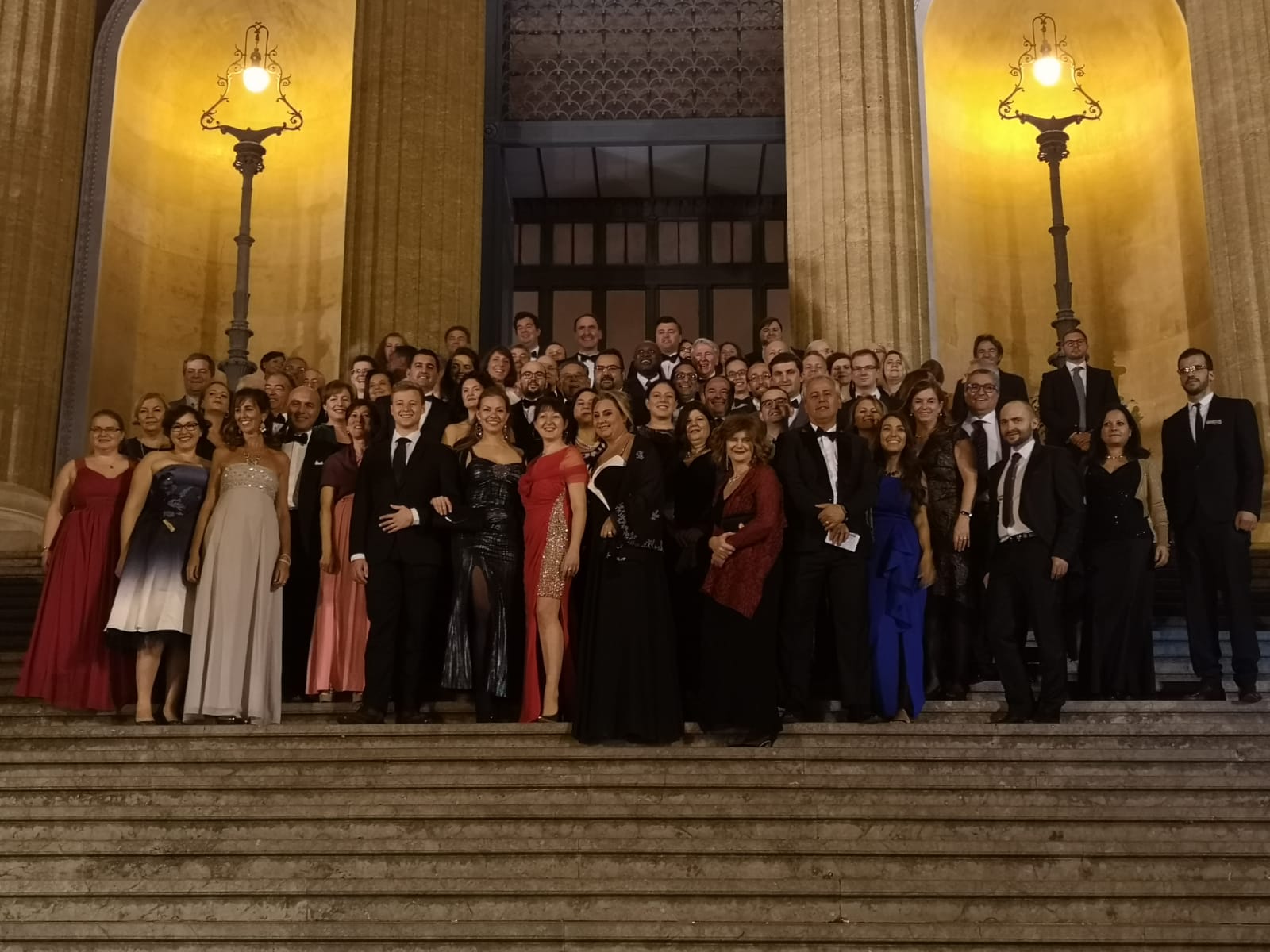 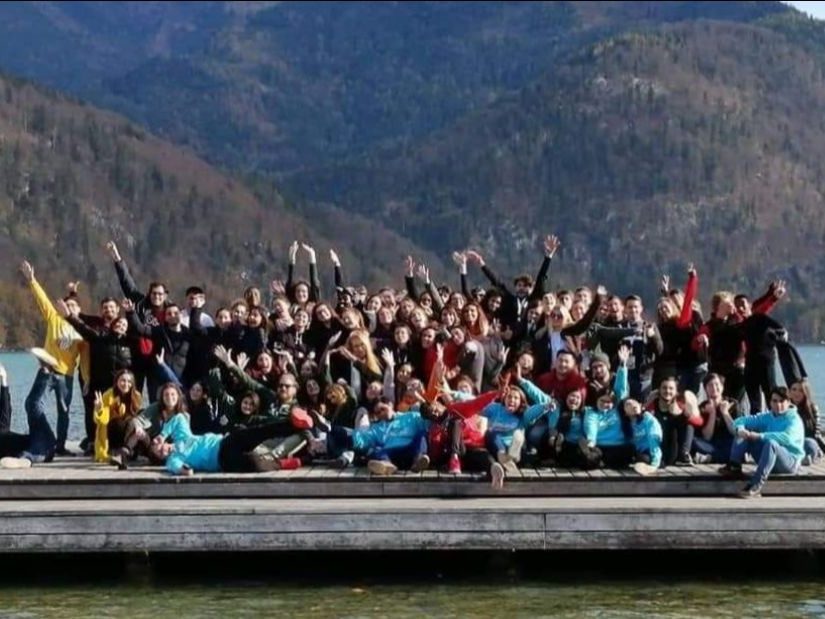 As it already became a tradition, on November  2nd AIESEC Alumni visited ALPS, where we could introduce our association and our offerings to student AIESEC. Of course we started the presentation with our own AAA roll call, while wearing our new AAA merchandise. The main part of our appearance was the roundtable discussions, where AIESECers could ask the Alumni any questions – be it about their active term or about personal stuff.

During the conference we were also able to get to know the new members of AIESEC in Austria, while better understanding what they expect from an Alumni organization. Furthermore we had talks with the MC to get their input on the matter as well.

A strong connection to the people from Linz was formed, demonstrating the interest for an Alumnite there. The night ended with a Gala, which transitioned into a party with a Boatrace, where the Alumni could secure the third place. 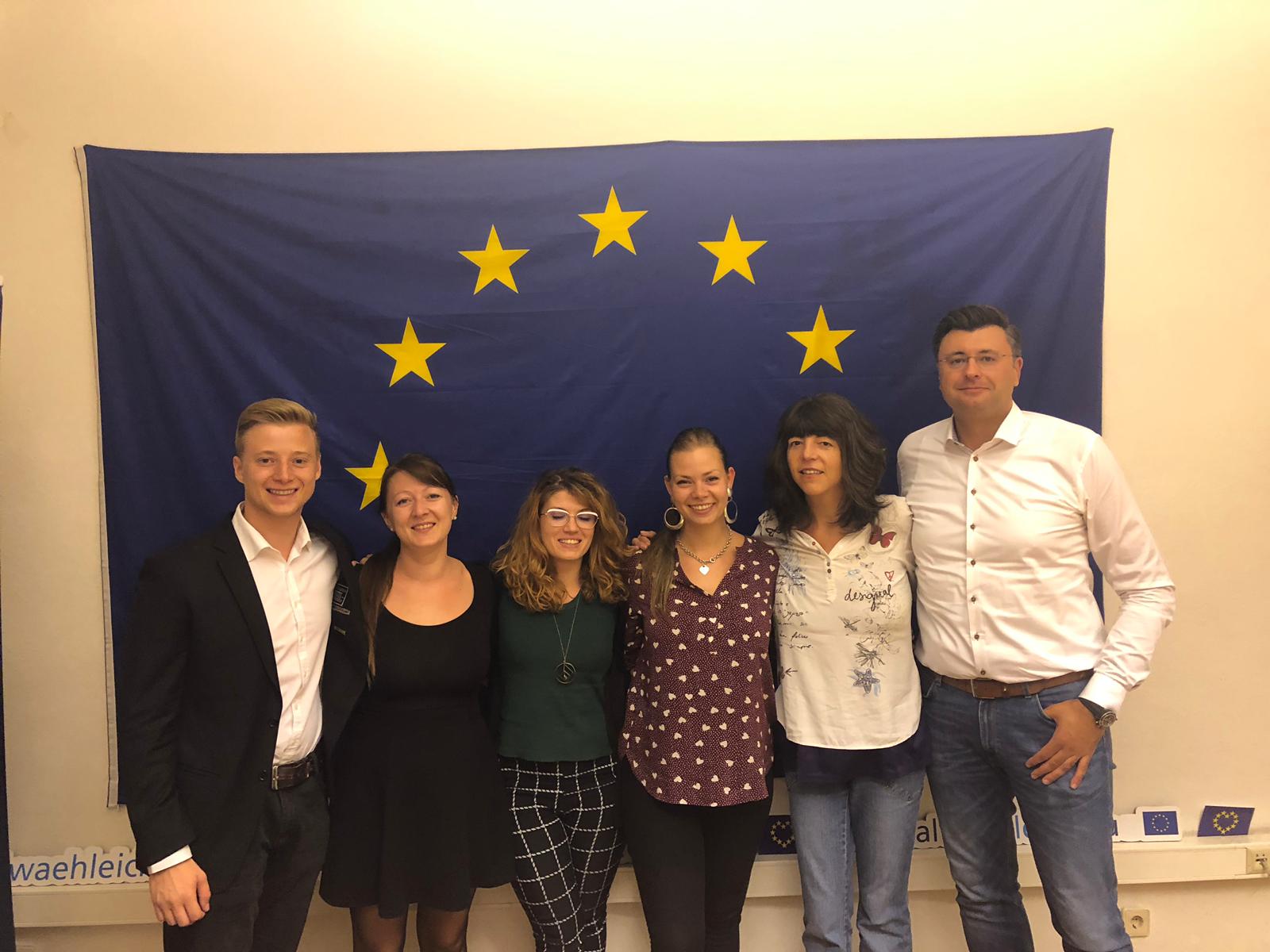 A new term is about to start for the EB of AIESEC Alumni Austria. And here we are, as one of the biggest EBs in the last couple of years.

We wish to use our manpower to regularly host Alumni Events like ALUMnites or Alumni in the Spotlight. To also continue our awesome international footprint as Austrians! And also to foster the bridge between youth AIESEC through Mentoring, workshops and an overall stronger presence at their events!

Looking forward to a great time with all Alumni 🙂